How it was to paint HeroQuest

When I played HeroQuest again, after 25 or 30 years or so, what I had on the table was a second hand, very good set. All pieces were there, including candlesticks (I broke one while unpacking) and a perfect gargoyle (my sister tried to understand if the head was removable... it was, not just in the way she removed it...).

Anyway, accidents aside, the set was in perfect conditions, and unpainted. We played and it was like when we were kids. The monsters were green, sometimes white, the heroes red and in retrospective, they should be since they enter the lairs of the monsters and kill them one by one, so I guess it makes sense for the heroes miniatures to be blood red.

The furnitures made my players go wow almost as much as the miniatures. I'm saying it was almost like when we were kids because I was lucky enough to play with my daugther, my girlfriend, and my little sister and her husband - and none of them has ever played HeroQuest nor anything remotely similar. There were no discussions about the mechanics or their "simplicity if compared to ..." actually, in the first one or two quests they complained about "too many rules!" :-)

So the sense of wonder and discovery was all there, and then I started painting!

It's something I failed to do as a teenager (I didn't even try); the few miniature games I had (or friends' games I played at their house) were all bare plastic. Even when my friends moved to Warhammer Fantasy Battles, for a long time they played gray (bare plastic, bare metal). In the end I moved to other games, and in general to other stuff in life.

Sometimes some of my old friends would show me a miniature they've painted (they were really good at it). I tried once to take a brush, painted a Bretonnian horse with a friend, gave up.

Well, not this time (I think it's called midlife crisis!).

And if you're like me, know that with under 100 coins worth of paints and brushes and primer, you can paint HeroQuest too! You just need to go slowly, and be patient. What you can see below, is the result of just a few months of work.

I assure you, it's not going to be perfect, but it's GREAT if compared to bare plastic! 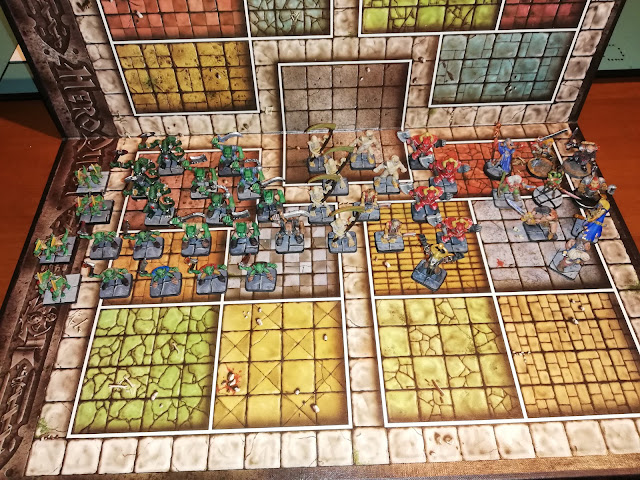 So from the left, we have: skinks, fimirs, orcs, goblins, undead, chaos warriors and chaos sorcerer, and a mix of adventurers heroes.
They all have a little story to tell, and I'll be boring and tell you all about them!
- The skinks are actually the most recent addition to the set, made last week to extend the monsters range (and I'll add more in the future!)
- In the back row, the fimirs, the first models I painted! (I didn't know dry-brushing, and the metal was really messy and difficult)
- The orcs, with Ulag in brown and black (my first time taking the liberty of doing something "different" than what I saw on the reference images on the web)
- Front row, the goblins (they were the first were I tried to paint eyes, and they look a bit like The Kiss... then I went back to fimirs and orcs and did a slightly cleaner job) 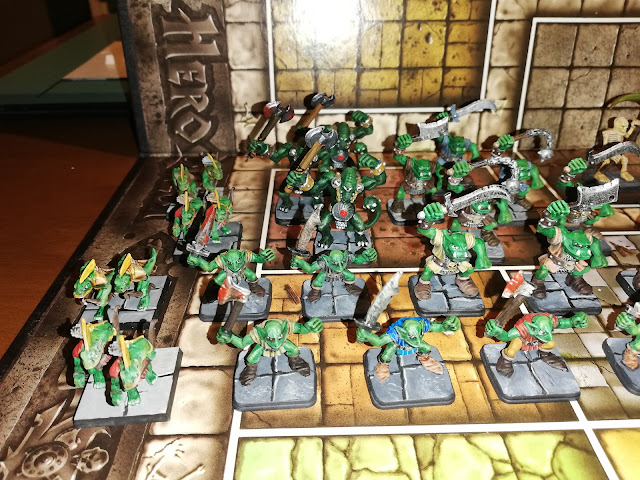 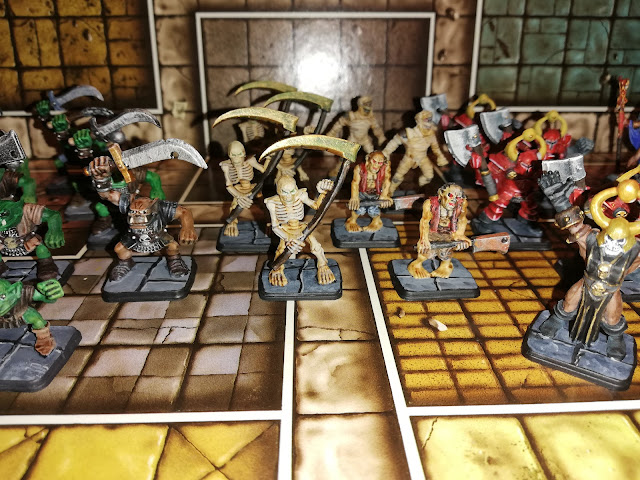 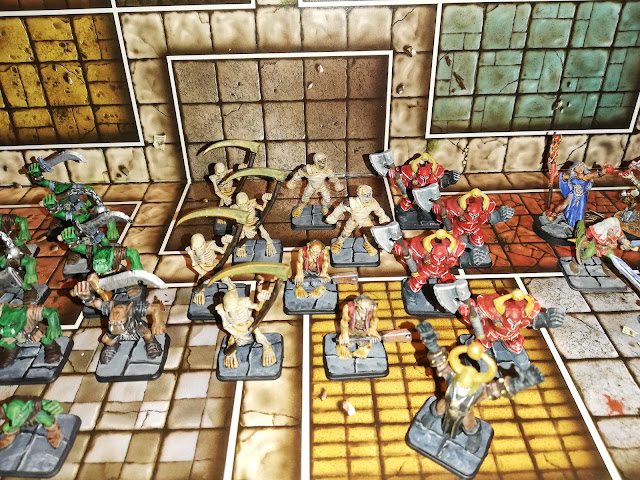 - And finally a group of heroes, from the back row: there is a female wizard (for my daugher), a female barbarian, a variant dwarf (I wanted to test Reaper miniatures), a resin elf reproduction (better than what I expected, with a recycled shield), a female elf for my sister, a red bearded dwarf (Chronopia model I found for sale) for my girlfriend, and then the (slightly larger than expected) resin sculptures of the barbarian (for my sister's husband - for now first and last attempt at NMM on the sword, because BROAAAADSWORD), the wizard (my daugher is considering switching to this model) and dwarf in the front 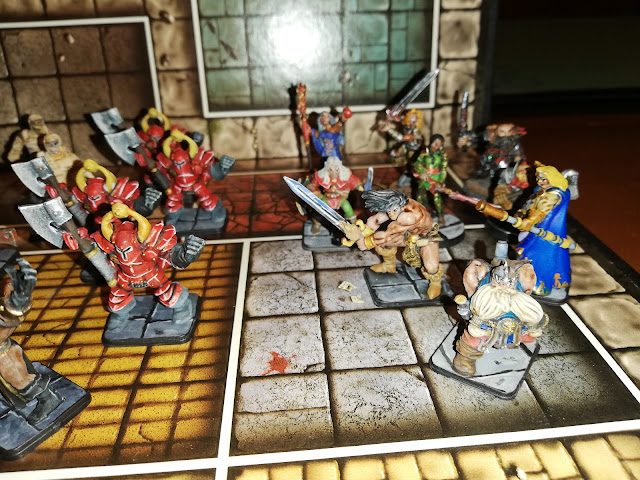 I didn't paint yet the original Gargoyle and original heroes... I am still afraid I will make a mess, and while original monsters are cheap to replace, Gargoyle and heroes are not...
Still, I expect before the end of the year to have the full - meaning, really, complete - set painted.
I will stick to a simple color scheme, be patient, and I will do the original heroes and Gargoyle as well.
Even if you never painted before in your life, if you have a HeroQuest set, give it a try. If you're afraid, buy a few spare miniatures and try with those. Be patient. Watch some videos (not too many). Make sure the videos are for beginners. Watch some more. Then paint. Paint. You might find it easier than you expected.
And I can tell you: when we played an adventure with ALL the miniatures on the board being painted, it was just GREAT.
Posted by Davide Pignedoli at 5:33 PM