So, last Sunday we played a little more... We were all worried for a possible new lockdown and in general for the whole Covid situation, so it was not a "regular" game. We all wore masks and I guess nobody was really focused on the game.

The best part for everyone was probably buying equipment at the start of the game. It was the first time they had enough gold coins to spend; the barbarian got an helm, the elf a shield, the wizard a staff. The dwarf had just 50 coins so had nothing to buy.

During the game the excitement for the new items they bought (giving a little defense boost to the barbarian and the elf, and a diagonal attack for the wizard) was fading quite quickly. I wonder if a slow progression of attack and defense dice will be enough to maintain a certain affection for the characters. The HQ rules are marvelously simple, but this means also that the characters are a little "flat".

Anyway, the game was quite easy; they learned their lesson and kept together without splitting the party, and relatively easily killed the monsters until they reached Ulag and the Chaos warrior in the final room. This is a simple quest, and was made easier by the fact that we're playing the Italian version which is one of those EU versions with monsters with 1 Body point only.

I gave the Chaos warrior and Ulag the American Body points (3 and 3 if I recall correctly) and this made the fight last a little longer, but a Ball of Flame by the wizard was putting an easy end to it.

I am not sure if it was the "right" call: we played with a certain set of rules and then I switched to more Body points for the final boss (which makes sense, yes, but it is still "cheating"). Yes, it was cheating for the purpose of adding a little tension and make the final combat last a little longer, and I didn't really have the chance to kill any of the heroes... but it still leaves me a bit uncomfortable. I tend to try to force myself to follow rules and obey the dice results - even when I don't like the outcome that much. The point is to make the best with what luck is serving on our plate... and the EU version of HQ is putting on my plate (and the one of my players) very simple quests...

What do you think?

Also, I want to think a little more about the equipment cards and possibly some "skills" cards... I don't want to make the game too complex or have players constantly looking at cards for special skills etc. but I also fear that a slow grind of one more attack die or one more defence die will be not enough to really get them attached to the characters.

Last thing: I received the resin remakes of the HQ heroes. They are really, really nice. I am still pondering if to paint or not the original miniatures (given their "value"), but in the meanwhile, I started with the remakes.

What do you think of the barbarian? (picture with and without flash) 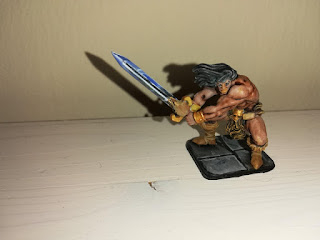 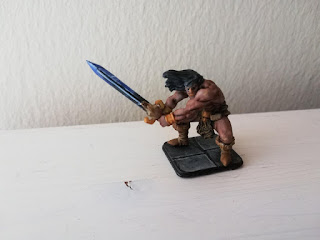 Posted by Davide Pignedoli at 12:33 PM No comments: