While the rest of the world talks about the new re-print (I'll call it re-print, with a new look, but just a re-print), here is my first little experiment after bringing back the game at the table after 30 years or so...

It's a short series of three adventures, and it is made to be played from zero, with new heroes. So it should fit any new group (new players, or veterans willing to start a new campaign without re-playing the original questbook).

It also introduces monsters little by little, and there is a nasty twist with the undead. I hope you'll like it...

I already have a draft for the next adventures, so the goal is to have a full campaign in a total of 3 issues of this fanzine... well, we'll see how it goes. Have fun! 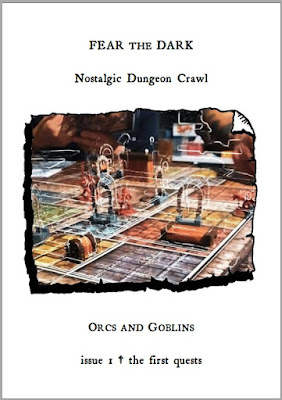 Posted by Davide Pignedoli at 4:53 PM No comments:

Email ThisBlogThis!Share to TwitterShare to FacebookShare to Pinterest
Labels: Fear the Dark, HeroQuest

A second HeroQuest session with the family

A few weeks ago I managed to get my daughter, my partner, my sister and her husband at the table to play HeroQuest - and last week we've met again for a second round. This time we played The Trial; as many others I used The Rescue of Sir Ragnar as the first introductory adventure.

I warned my players that The Trial is a harder adventure, and that they should try to remember the lessons that they've learned the last time. But as always, they wanted to explore and find treasures fast, which of course led to some troubles.

My sister (the elf) and her husband (the barbarian) ventured in the rooms at the bottom of the map, and the barbarian really managed to escalate things quickly. He went ahead opening doors even before getting rid of all the enemies left behind (counting on the elf to take care of orcs and goblins while he dealt with the fimir and chaos warriors). Unfortunately for them, they brought their 6 years old kid with them, and he was tasked with rolling dice for monsters. I don't recall how many times he rolled monsters' attacks that were all-skulls or nearly all-skulls, but definitely more than what statistics should allow him too :-)

(he was playing with the Gargoyle all the evening, waiting for the heroes to go to the central room and suggesting several times to his parents that they should look for the entrance to that room... he was saying to them several times that the big monster was going to kill them all)

While the barbarian and the elf were facing death like from the very start of the game, my daughter (the wizard) and my partner (the dwarf) moved towards the top half of the map, where the undead are. Skeletons, zombies and mummies were just recently painted and I was glad to bring them to the table. The dwarf and the wizard really took the game into hardcore treasure searching; they looked for gold in every room, while often the barbarian just went after more blood, and the elf tried to keep up and not be killed by the enemies left behind. The best part was a goblin which refused to die for like two or three consecutive turns, because of several lucky defense rolls, and was named "the acrobat" for how skillful he was in avoiding all attacks.

The dwarf and the wizard in the end took care of the goblins and the skeletons in the first rooms, but then faced a mummy with the zombies and had to retreat carefully while the barbarian and the elf rushed to help them. Together, they faced the undead in the tomb room. By then, they worked out some strategy, and I decided to add a little bit of extra-terror to the game. They wanted to lure the undead out of the tomb room, but the monsters did not exit and instead tried to lift the lid of coffin.

I didn't say what was inside, but just the threat was enough. They charged into the room, and then defeated the undead, and found the treasure. I should remember that HeroQuest is not just a boardgame and that every little piece on the table, with some narrative or descriptive bits, can change the perception from pure strategy to adventure, mistery, theat, fear.

They were out of healing spells, and they decided to avoid the Gargoyle in the central room. I guess the undead (and the barbarian) were a lesson they've learned (but I tought so too in the first adventure, and also this second time it took a little bit for them to favour caution over rushing). 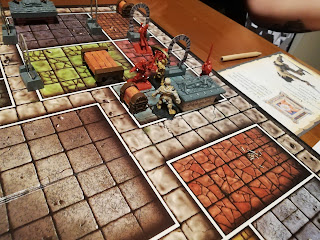 When it was time for them to return, the wizard used Pass Through Rock to enter a room were they didn't search for treasures before, beating the others to it. We never discussed if they would share treasures equally or keep each what they've found... but I guess we're going for the selfish-mode approach :-)  Well, the wizard found a wandering monster instead of a treasure; my daughter survived the encounter but had yet another good reason to push for a retreat instead of a final battle.

The Gargoyle, this time, was undefeated. I might bring it up another time, to remind them of their failure!

Anyway, they all managed to find some treasure in other rooms, and we'll see next time if they have enough gold to buy something.

If you've read my previous play report, you might remember that my sister broke the head of the Gargoyle... well, that one is fixed. This time, instead, the casualties were an orc soaked in beer by accident (well, that just adds flavour to it), and the nasty goblin ("the acrobat") which kept rolling black shields and not dying which was thrown into the dead pile with a flick of rage when he finally succumbed (so much for honoring worthy opponents). This time, though, the miniatures were painted; I still have to assess the possible damage, but I need to teach the four adventurers to be a little bit more careful when they handle these little plastic pieces of history.

We should play again in a few weeks, and I hope to have the heroes painted by then... and we'll see how they deal with Ulag, the Orc Warlord!

Posted by Davide Pignedoli at 12:28 PM No comments:

So here are a few more pictures of my progress painting the HeroQuest miniatures. They're far from prefect and I will probably fix many little details in the future, but for now I'm going to call them done and ready for the table.

I'm the next few weeks I'll work on the remaining monsters and I bought some remastered heroes on ebay... I'm planning to do the heroes last, since I can see my skills slowly improving mini after mini and I'd like the heroes do be decently done. 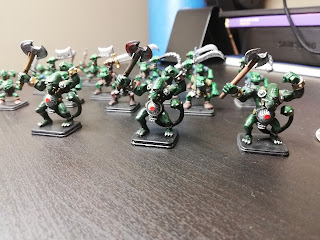 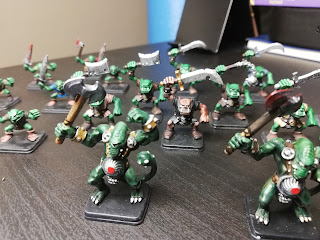 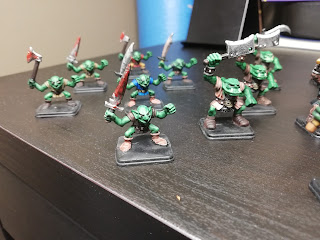 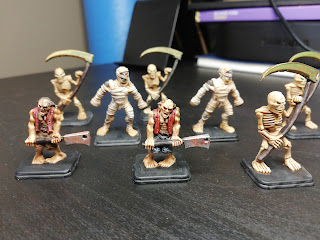 Posted by Davide Pignedoli at 3:20 PM No comments:

Not only I found a 2nd hand HeroQuest box in very good shape, but I bought colors, brushes, etc. and I am trying my hand at miniature painting. The goal is to have a fully painted set before the end of the year.

It's been like 25 years since I last touched a brush, and back when I was a teenager I was not very good at painting. I found out that even though my eyes are not the same anymore, I am much more patient now, and that helps a lot. And I use a magnifying glass, too :-)

So with the help of patience and video tutorials (which are really a big help! and those were also not available when I was young) and Contrast Colors, I am working first on the green monsters. It's not easy but if I manage to get in the right mood, miniature painting is very relaxing. And it feels good to have a visible, tangible project. 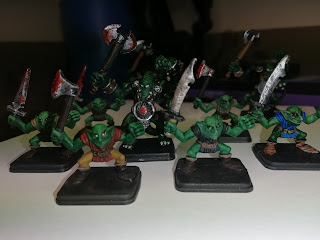 Here you can see a few pictures of goblins and fimirs. I used mostly Contrast for goblins, while with the fimirs I took more time to prepare them with a black wash. I struggle mostly with metals, but I am improving with those as well. I don't have pictures of orcs yet, but I will post those soon. Then it will be time to start with the undead. 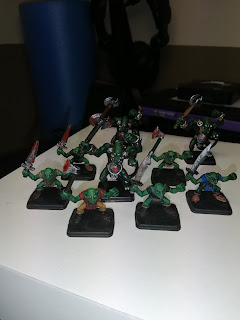 Next week I will host the 2nd game session for my family (partner, daughter, sister and her husband) and once the set is fully painted, I'll start a second group with my friends. I am writing several new quests with also a few house-rules to use with my friends, to get back to the sense of novelty and discovery that HeroQuest gave us back then... 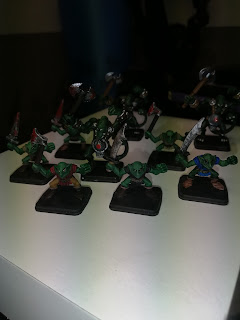 Posted by Davide Pignedoli at 2:53 PM No comments: