The Village and the Witch

This adventure is designed for low-level characters and is intended as an encounter to run in one or two sessions, between other adventures.
This module is designed to generate a Village, a Witch, and some additional weirdness: two pages with die-drop tables to outline the village (map and content), and two pages with a series of random tables to generate a Witch and its connection to the village.
The rest of the module contains some instructions, random or less random NPCs and other weirdness, some digression about alignment and so forth.

By beyondfomalhaut
"The product on review here is a brief toolkit to randomly generate adventures concerning an Early Modern village, a witch with evil designs, and various details to connect the two and instigate a catastrophic conflict. [...] You need to be running LotFP (or Davide’s rather interesting variant of it, published in the Black Dogs zine), pre-derp WFRP, or something sharing their basic assumptions to find this useful. [...] If you want to burn some witches, though, it is practically what your friendly plague doctor ordered. [...]
The procedure works with die drop tables. You roll all your polyhedra, and while the die results determine the individual elements of the adventure (from village layout and buildings to the specifics and peculiarities of the case), their positioning determines how these elements are connected. This provides a simple, yet adaptable framework to run the adventure, in both the physical and non-physical sense. [...] How does it stack up? The results of the random generation system, while nothing out of the ordinary, are robust. The suggestions to make it work are sensible. It is not a packaged adventure, but it is a module (in the original sense). [...]"
http://beyondfomalhaut.blogspot.com/2018/12/review-village-and-witch.html

By tenfootpole
This fifteen page supplement has some tables in it that lets the DM generate a witch, a village, and some opposition to the witch in the village, as well as some witch events. It’s not an adventure but rather a situation-builder (in fact, I think the designer uses almost the same words.) I think it’s good at what it does. [...]
The die drop helps determines the layout of the village with the results of the dice being the structures and situations involved. Thus we get a little information about the village, the basic layout of the place, major features, the witch details, and who opposes the witch. The tables, taken together, are excellent as inspiration and for building a situation. [...]
It recognizes the dynamics required to create tension, and therefore adventure. The booklet tells you several times that Things Have Reached A Boiling Point. The tables help with that. The opposition is dynamic on the tables. The witch events are dynamic. The tables are designed to strategically locate open gas barrels in a village where everyone lights their cigarettes with a blowtorch they carry. This is not passive. It’s meant to create a situation FOR PLAY and create a situation it does! [...]
https://tenfootpole.org/ironspike/?p=6216 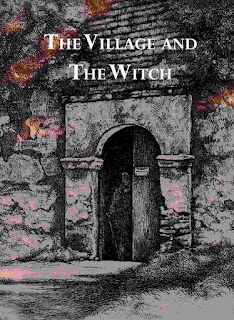 Tukram's Tomb
The Tomb of Tukram is a short introductory adventure for the Crying Blades, or any OSR system.
It presents a traditional expedition inside an ancient tomb, allegedly full of treasures and rich of potentially deadly encounters.
The adventure is written in the format I find most useful and easy to run: the GM can read the adventure beforehand and be prepared, or otherwise can basically just run it while reading it for the first time.
In the rare cases where a location references another, there is a clear note about it that guides the GM to the appropriate page. Zero percent prep and work, one hundred percent fun.

By tenfootpole
"This is a sixteen room twenty-eight page tomb of a barbarian. It is, generally, a tomb full of traps with a couple of undead or statue encounters,and leans heavily to the “quiet exploration” side of the D&D adventure spectrum. It’s overly verbose writing style combined with a conversational organization style leads to difficulty in finding information. [...]
The whole thing has a very slow feel to it. Imagine a slow and careful “real life” exploration of a tomb filled with traps and the like. That’s the vibe this adventure puts out, probably because of the lack of any pressure. There are not really any creatures around to pressure decisions or a slow careful exploration. [...]"
https://tenfootpole.org/ironspike/?p=3479

By Frugal GM
"Overall I'd say that Tukram's Tomb is an interesting adventure seed that needs to be edited and formatted a bit better to be a full-fledged adventure."
https://www.frugalgm.com/2017/01/frugal-gm-review-tukrams-tomb.html

By beyondfomalhaut
"A brief first-level adventure featuring the tomb of a barbarian warlord; one of several, better than some, but falling short of its potential. [...] The tomb itself, while very small at 17 keyed areas, is more interesting. It has a sense of place and history, with a real barbarian feel. [...] It feels timeworn, and the encounters bear this out – some of the traps don’t work, some of the puzzles have changed due to the passage of time. [...]"
http://beyondfomalhaut.blogspot.com/2017/01/tukrams-tomb.html 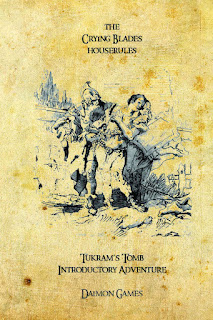 The Tall Witch
The Tall Witch is a short introductory adventure for the Crying Blades, or any OSR system.
It presents a classic adventure, with a mission assigned to the characters by the priest of a small village, and rumors of the coming awakening of the terrible Tall Witch.

By Eric F.
"The plot sounds simple enough;'A mysterious witch is about to be born and threatens the local community'. Sounds simple but I was surprised & kinda shocked that this little adventure came out in 2017 but passed by my OSR radar. The layout is very nicely done & it clocks in at a well filled out twenty seven pages. The actual plot is a bit more sophisticated [...] Even though 'The Tall Witch' adventure is meant for the Crying Blades rpg I can see this module working very well with many traditional OSR games or campaign settings. [...] Over all this isn't a straight up slaughter fest but a thinking man's adventure. The Tall Witch feels like a Lamentations of the Flame Princess adventure & affair. [...] The loose style & passion of Davide Pignedoli's writing & design of this adventure a snap to adapt into a relatively dangerous & horror filled evening or multiple session of OSR play. This isn't the traditional OSR adventure but one where the PC's are going to be deciding their own fate. This one might end with the characters killing themselves off by their own stupidity. There are some twists & turns in this adventure which could challenge even the most jaded of old school palettes. I think that the Tall Witch adventure is worth your time & your OSR taste for a well thought out & dangerous adventure!"

By Wind L.
"I ran this as a one-shot and it was great--the deep existential questions that it raises are worth the price alone. I love the dark, twisted impact that it made on our campaign." 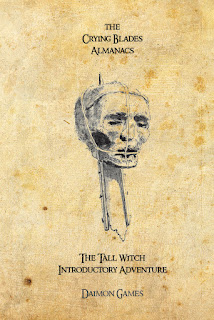