With issue 5, this fanzine continues to present a set of additional rules which aim to make the game last longer, funnirer and slightly crunchier (without drifting too far from its original simplicity). In this issue you’ll find four new characters sheets which allow your players to pick up the old heroes miniatures giving them a new life. These characters, though, are not born “heroes” but “adventurers”.

The first thing that comes to mind, when thinking of adventurers and dungeon crawling, is that characters venture in dark and dangerous dungeons to find treasures, and with treasures come experience and improvements. These improvements are something to look forward to; characters start weak and may have to retreat from missions which are too dangerous. They cannot face any kind of threat from the start - but players know that their characters can become stronger in time, and this makes up for their early struggles.

In a few words, then, issue 5 just gives you your four original adventurers with some cool abilities to unlock adventure after adventure. It features a simple system for gaining XP and therefore unlocking these abilities, and a simple encumbrance system with movement penalty.

As all the previous issues, this is free (Pay What You Want on Drivethrurpg... of course if you want to throw me a dollar, your support will be appreciated!): 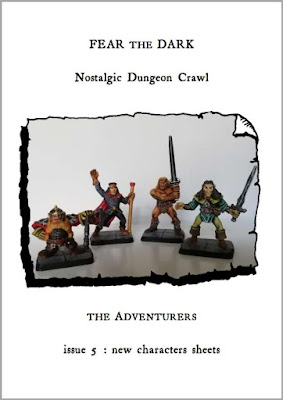 If you missed them, here are the previous issues:

Posted by Davide Pignedoli at 11:04 AM No comments:

Although I'm a fan of the old school design of the original HeroQuest, I have to say that some new miniatures have their charme.

If you've read the blog before, you'll know already that I started painting less than one year ago, and soon started to work on a 2nd hand HeroQuest set, until I completed all of its miniatures and furniture. Moreover, I started slowly adding to it some old miniatures for additional monsters etc...

But there is only so much you can do with old school design, and I hate to mix old and new minis, because of their different sizes and their diffent styles.

So I started exploring AoS miniatures, and in particular I thought Underworlds (a game I don't play...) had some very cool sets. The good thing about Underworlds is that it provides monsters in small warbands, usually 4 to 6 or 7 miniatures in a cheap(ish) box. (Cheap at least if compared to other GW products)

It looked like I could build a "new-looking" HeroQuest set almost only with Underworlds warbands... they had goblins and orks, released recently some saurian (seraphon) which could replace fimirs, they had skeletons, and ghouls which could replace the zombies... no mummies but plenty of spectres (like nighthaunts or banshees) and various boxes of barbarians/chaos champions etc.

I was just in trouble for the heroes... what to do? Then I realized that the modern-looking heroes I bought on ebay (which represent the original heroes in the poses they had on the box cover) were perfect. They were of the proper size (Underworlds and in general modern miniatures are more on the 32mm scale than 28mm), and were dynamic enough.

They just had squared bases.

So I bought DAS and bluestuff (my first experiment with bluestuff, really), and "cloned" a few round bases from other Underworlds miniatures. I wanted Underworlds bases, not just round bases. Underworlds provides each mini with a scenic base which is also a little bit taller than the simple flat discs we typically use. And I wanted the same base for heroes and monsters.

Below is the result: a barbarian and a few monsters for scale, then the whole party of the 4 heroes. Not bad; I actually prefer this look to the one of the new HeroQuest remake that Hasbro will put out (and which is unclear if it will be available for sale after their crowd-funding campaign). 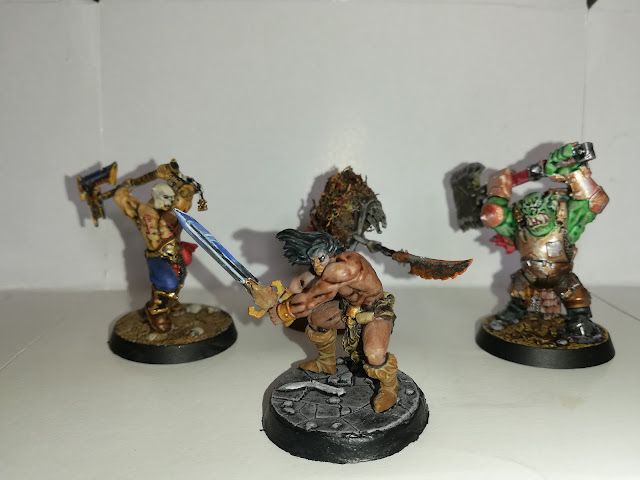 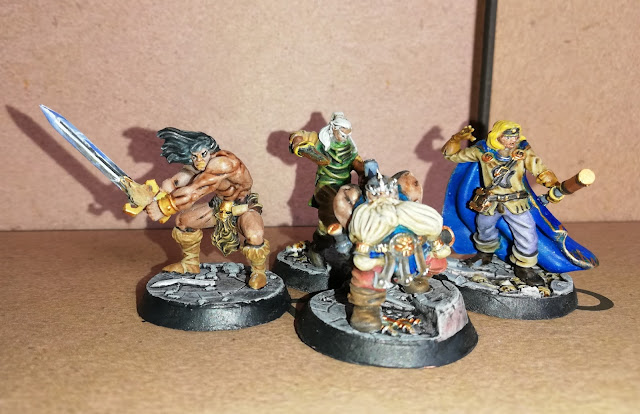 Posted by Davide Pignedoli at 5:23 PM No comments: